To Flu Shot or Not to Flu Shot…That is the Question!

I have seen numerous posts on vaccines and questions about vaccines on Facebook lately, so I thought I’d let you all know where I stand on the issue and the reasons behind my educated decision.

Vaccines have become more of a hot topic in the past 5 years or so as the government becomes more intense about mandating them and educated parents become more passionate about stopping them. It amazes me how much information is withheld from general knowledge. What’s pretty mind boggling is that I doubt most doctors and nurses know the contents of the vaccines they are injecting into millions of people every day.  Don’t get me wrong, the “idea” of vaccines are great! If you inject this “dormant” version of an illness into your body, your body will be immune to it and you can’t get it in the full blown version. I wish this was true…Unfortunately it isn’t this simple. 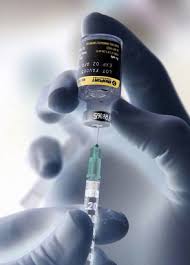 The average person is receiving a message from the FDA & CDC that all we have to do is get poked with a needle and all of a sudden we will have super powers that protect us from all harm. Is that what you learned growing up? Parents, is that how you feel with what you need to do for your kids?

You are not alone if you thought this way. I am not going to demand that you make one decision or another when it comes to vaccine, you are a grown adult and it is your responsibility what you do with your life. All I ask is that you are responsibly informed about both sides. When we don’t know any better, we tend to look to medical professionals as all-knowing beings, but they are just humans with a little more education in certain areas. We need to make sure we are aware of the information and facts with some of these critical issues.

I hope this will encourage you to hear both sides of the story and become fully educated about the flu vaccine, how it functions, what it does to our bodies, and the hidden and serious risks involved.

5 FACTS YOU SHOULD KNOW ABOUT THE FLU SHOT

1. It Contains Preservatives including Mercury.

Flu vaccines contain a preservative called ¨Thimerosal¨, a compound that is 50%. FDA website quotes ¨Over the past several years, because of an increasing awareness of the theoretical potential for neurotoxicity of even low levels of organomercurials and because of the increased number of thimerosal containing vaccines that had been added to the infant immunization schedule, concerns about the use of thimerosal in vaccines and other products have been raised.¨ Supposedly, the FDA is trying to get manufacturers to lower the levels or remove it entirely, but the only way to know if your flu vaccine has this neurotoxin is to first find out the brand and contact the company yourself.

Studies have showed the Mercury accumulates in the brain. Did you ever make the connection that flu vaccines have sky rocketed right along with the rates of Autism and Alzheimers? Both are caused by an imbalance in the brain. A U.S. study found that children who received vaccines containing thimerosal, were more than twice as likely to develop autism than children who did not! According to Tom Verstraeten, an epidemiologist who had analyzed data on the CDC’s database, thimerosal appeared to be responsible for a dramatic increase in autism and other neurological disorders. He offered no cause for correlation for these findings, but held that the statistical evidence linking vaccines and neurological disorders was strong. but In 1977, a Russian study found that adults exposed to ethylmercury, the form of mercury in thimerosal, suffered brain damage years later. As a result, thimerosal was banned in 1980. Mercury poisoning has also been linked to cardiovascular disease, seizures,mental retardation, hyperactivity, dyslexia and many other nervous system conditions. That’s why the FDA rigorously limits exposure to mercury in foods and drugs, but why allow it in vaccines??…$$$ Unfortunately the flu vaccine isn´t the only one with mercury problems… Some vaccines, such as vaccines for hepatitis B, contained as much as 12.5 micrograms of mercury per dose. That’s more than 100 times the EPA’s upper limit standard when administered to infants.

Vaccines are supposed to ¨prevent¨us from getting sick, right? Unfortunately, instead they suppress our immune system so we are more vulnerable to illness. How do they do this? The chemicals, the viruses in the vaccine, and the DNA/RNA from foreign animal tissues all act to suppress our immune system. We are risking a lot here! Our only defense against the millions and millions of germs and pathogens we face every second of the day is our incredible immune system! When this is suppressed, we are in big trouble. This suppression doesn´t just last a few hours, but months to years at a time, and if an invader pathogen takes hold of our weakened state we can be down and struggling for who knows how long. Read this great article my Dr. Mercola as he goes in depth on this topic. Ever wonder why people get sick after a vaccine? Now you know one of the reasons.

3. Flu vaccines and vaccines in general have NEVER been scientifically PROVEN effective.

Well isn’t that a surprise? This is a HUGE deal! You know that special test they do to ENSURE something works? It’s a double-blind placebo trial so neither the patients nor the ones distributing the medication knows which one is the real deal and which is placebo. This has NEVER been done for vaccines! How can that be? We have taken an idea and just ran with it making it mandatory and swearing by it’s effectiveness when it has NEVER been proven to be so! Follow the money trail…The Vaccine industry has SKYROCKETED as more and more become required.

4. Vaccines can be seen as the root of MANY diseases.

“I never saw cancer in an un-vaccinated person.”-Dr W B Clarke, circa 1909. Yes, not everybody gets cancer after receiving a vaccine, but their body has been seeded with the ingredients for cancer to grow. It is the environment which allows cancer to grow in the first place, and vaccines create that environment.. It has been known for over 2 centuries now that vaccines clog our lymphatic system. Our lymphatic system is what filters our blood and keeps us ¨clean¨on the insides. When these lymph nodes become clogged it can develop into a very serious problem causing many diseases including cancer. ¨Our lymphatic system is designed to carry our lymphocytes throughout our body and maintain control over our cellular immunity. Therefore, the injection of large molecular sized proteins (foreign tissues in the vaccines) will clog our lymph-nodes and create problems for the lymphatic system. Therefore, it is no mystery that vaccines and lymphatic diseases, like leukemias and lymphomas, are related.¨(Mercola)

5. Much more than a flu virus in the syringe.

Each company and brand varies slightly on their ingredient list. Here are some examples of what they contain:

As you can see, there are many chemicals, preservatives, and toxic substances that are injected into us with each flu vaccination. Here is a great page that goes more in depth into each ingredient and how it is harmful.

In conclusion,  I hope seeing the other side of the flu vaccine will help you make a more informed decision when choosing weather or not to vaccinate yourself and your family. Our immune systems are an incredible tool in fighting disease, and as long as we take care of ourselves through proper nutrition, rest, and exercise, our bodies will take care of any bumps along the way.

SAVE YOUR SPOT TODAY!

Costco Hepatitis A Berries- What To Do

Want to Know My Health Secrets?

Welcome!
I hope you find the resources on this page helpful and inspiring to motivate you towards optimal health & wellness. The purpose behind "The Health Patriot" is to bring awareness to and redefine the health trends in America. For being such a civilized nation, we are an incredibly sick population. Unfortunately, most people don't realize how inefficiently their bodies are performing because it has become our new normal. Join me in my commitment to live this life to the fullest as we set new standards for future generations to live truly free & healthy lives.